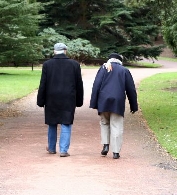 Walking is touted so often as an easy and effective way for losing weight and maintaining good health that many of us have come to tune this advice out because we consider it outdated. Instead, we look for what we consider more advanced and more rigorous forms of exercise with the belief that only something high-tech and insanely punishing can possibly work for taking off excess pounds and inches. But before you break out your credit card for the latest and greatest weight loss contraption, do yourself a big favor, and consider the benefits of regular strolls around the neighborhood.

About a year ago, while out driving in the early evening hours, I began noticing one of my neighbors out and about around our neighborhood as well as trekking along the main roads surrounding where we live. I was noticing him almost every evening taking a leisurely stroll – definitely no signs of “power walking”. I started getting impressed with the regularity of his walks as well as how far afield his route was taking him. I estimated that his complete circuit was probably close to three miles. What struck me the most was that he didn’t seem at all interested in how long it took him to get back home – it seemed for all the world that he was having a great time just enjoying the journey and we’d exchange waves when I’d pass by in my car.

As for a little background, my neighbor is a middle-aged guy who is a “big man.” By that, I mean he’s fairly tall and solidly built with a barrel chest and is clearly a strong guy, but over the years he’s bulked up a bit too much around the mid-section. This form of “bulking up” is certainly something that I can relate to!

A few weeks after first noticing my neighbor out walking I encountered him while doing some work in the front yard. I mentioned his walking and how good he was looking. He was noticeably slimmed down. He told me that he had lost around 30 pounds since starting! There was no question that he looked great and he also seemed to be very proud of his accomplishment. I reiterated how good he was looking and told him to keep it up.

Fast forward to almost a year later. I again encountered my neighbor out in the front yard, but now It appeared that he had regained all of the weight he had lost. It then occurred to me that I couldn’t recall the last time I saw him out walking. We chatted a bit about some homeowner issues and then went on our ways. I thought briefly about asking him about the walking, but decided against it. I wasn’t sure how that question would go over, but I may muster the courage to ask the next time I see him – mainly out of concern for his health.

So what are we to conclude from this suburban tale of pounds lost and then recovered?

On its surface, it would appear to be yet another example of a failed attempt to lose weight of which there is an almost infinite supply, however, that’s not the way I look at it at all. Quite the contrary! Unlike most weight loss attempts, this one was incredibly successful and is a strong testament to just how effective a regimen of sustained and regular walking can be for losing a large amount of excess weight. Consider that against all the fad diet plans and belly shaper products that do nothing but drain your wallet and dampen your enthusiasm for getting in shape altogether.

My neighbor is living (walking) proof that walking, when done consistently at sufficient levels of exertion, can be one of the most effective methods for losing weight around. And did I mention how inexpensive it is? No monthly gym fees or expensive clothing and equipment required!

I should also point out that my neighbor’s case wasn’t a fluke nor is he a freak of nature; as I’ve also observed similar kinds of results in others who simply took up regular walking. What happened is that for whatever reason, my neighbor stopped going out for his regular evening walks. I’m not sure of the exact reason, and I’ll inquire the next time I see him, but my guess is that the seasons changed on him and he didn’t want to walk when it was dark and cold outside.

In light of this, let’s next have a look at some important points regarding starting and maintaining a regular walking regimen:

Walking as a form of exercise isn’t for everyone and I count myself in that group. I have a gym membership and since I also lift weights, I choose to jog on the treadmill while I’m there in order to get in my cardio work. But as we’ve seen, walking is highly effective for losing weight and is also probably the cheapest form of exercise you can engage in.

I highly recommend getting started on a regular walking regimen if you’ve been inactive for a long period of time so that you can ease into things. Once you get into a groove, you can then begin looking at other exercise options such as joining a gym or taking up a recreational sport. In the meantime, a leisurely walk around the neighborhood after dinner will do both your waistline and your soul a lot of good!