Resistant starches (RS) seem to have appeared out of nowhere in the popular press along with a lot of fanfare about their health benefits. Resistant starches are nothing new, as they’re found to some degree in all plants. Starch is the plant kingdom’s storage form of glucose and is analogous to glycogen in the animal kingdom. That is why, when digested into glucose, it can lead to the insulin spikes that low-carbers are so eager to avoid.

Resistant starches on the other hand, are forms of the starch that cannot be broken down by the starch-digesting enzyme, amylase, and converted into glucose. Resistant starches, however, can be used by beneficial colon bacteria as an energy source. You can think of RS as fuel for gut bacteria.

Amidst the recent hype on resistant starches, some temperance is in order. Resistant starch consumption may be contraindicated for those with certain digestive disorders such as celiac disease, gluten intolerance, small intestinal bacteria overgrowth, and IBS, to just name a few. Furthermore, the reduction in caloric content may be minimal since the fat substances produced by the gut bacteria can be absorbed and burned as calories, which sort of defeats the purpose [1].

There are actually four types of resistant starches, appropriately named: RS1, RS2, RS3 and RS4. We will focus on only one type here: RS3. 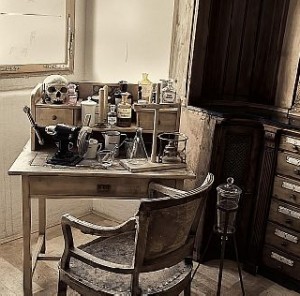 Type RS3 is formed by cooking the starch source in water and then allowing it to cool. If you’re so inclined, this provides the unique opportunity to take on the role of playing chemist in the kitchen. It also empowers the low-carb dieter to somewhat reduce the glycemic load of a once in a while pasta, bean, potato or rice dish.

Without going into too much messy scientific detail, when heated in water the two components of starch, amylose and amylopectin, form a gel, that when cooled, realign in a process known as retrogradation. This process turns the starch components into a crystalline form that is resistant to the actions of amylase. It may require several days in the fridge for this transformation to be completed.

It’s all in the cooling

Again, some reservation needs to be applied here. While the resistant starch levels are increased by this process, it might turn out to be only a small portion of the digestible starch. The original very high glycemic index of the starch may be significantly reduced, but it may still wind up being in the high range. Again, how this affects you all depends on your personal tolerance for high GI carbohydrates.

Getting back to our kitchen chemistry experiment, as a test case, I want to focus on maximizing RS3 in a potato salad preparation:

First we’re going to select the small red potato variety since they hold up well to boiling and are low in starch. There is some research to show that cooking the starch with an oil increases RS3 [2]. 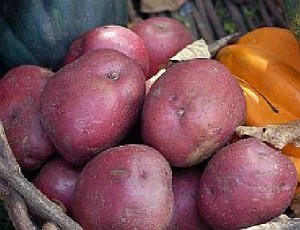 *The addition of vinegar to cooled potatoes was found to further decrease the GI index in one study.
**Rosemary has been implicated in lowering the GI of meals. 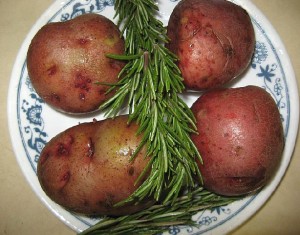 The long cooling time for the potatoes is because red potatoes are high in amylopectin, and take longer to undergo the retrogradation process than amylose [3].

I use an empty Claussen’s sauerkraut jar to store the potato salad. One study found that boiled potatoes stored in the cold for a day reduced the GI of the potatoes by 43%, however, the GI went from a whopping 168 to a still very high 96. Only the abstract was available, and no mention was made to the type of potato used. An even greater reduction in GI may have been achieved if the potatoes were allowed to cool for a longer period [4].

In the immortal words of the late, great, Julia Child, “Bon appetit!”

Thanks for this post on a timely topic, Rob. I’ve been noticing quite a bit of discussion on RS on some of the low-carb and Paleo blogs. I’m more interested in its effects on gut flora from a prebiotic standpoint rather than as a technique to lower GI. I’m not much of a potato eater, though we enjoy a cool, refreshing potato salad during the summer months. Perhaps you can write a follow up post on gut flora and the basics of pre and probitoics. Here’s an article that appeared in the Washington Post after you wrote this about using the same technique with rice. -Rich