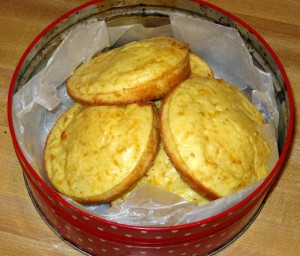 One of the first things that gets thrown out when starting to eat low carb is bread—bread of all kinds: sliced bread, dinner rolls, sub rolls (hoagie rolls in Philly), Kaiser rolls, English muffins, and biscuits (oh, no, not the biscuits!)

Wasn’t it bad enough that the pasta and rice also got banished and don’t get me started on the pizza! I think just about everyone who has begun a low-carb diet has eventually begun the search for the Holy Grail soon after starting and I’m not talking about the grail from Raiders of the Lost Ark.

It’s the search for substitutes for the great-tasting, carb-laden foods that most of us continue to crave after giving them up. It’s these cravings that never seem to subside and are often the ruin of many a low-carb diet despite the best of intentions (cue House of the New Rising Sun). The low-carb, and even gluten-free versions of these items, especially bread, almost always leave you disappointed. The ingredients in a lot of these breads run the gamut from nut and seed flours such as almond, coconut, and flaxseed to even chia seeds. I think I’d only want chia seeds on my retro Chia Pets and even that’s a stretch.

I’ve never tried any of the commercially available low-carb breads and really have no desire to at this point. The outrageous prices of most are more than enough to ward me off and if they turn out to taste like, well, flaxseed, then I’m really going to feel dumb. The homemade versions, though commendable for the attempt, often involve way too many ingredients and steps. And judging from the flour substitutes, it doesn’t look like something I’d want to attempt baking. I could be wrong, but instead, wondered if I could perform a “food makeover” that involved a “nutritional compromise.” It’s a fairly large one at first glance after you learn what one of the ingredients is.

My Challenge: would it be possible to make a dilute version of a high-carb, highly-refined food item such as a biscuit or roll that would taste very close to the full-on version, but be compatible with my way of eating while not incurring too much of a unhealthy dose of things like trans-fat, sugar, and refined white flour? 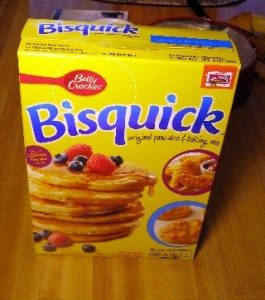 It’s an outrage I tell, ya!

I began by studying a lot of the low-carb and gluten-free bread and biscuit recipes. A version that caught my eye used eggs and cheddar cheese as the foundation for the “dough.” Batter would be a more apt description. It also employed baking powder and a few other ingredients to give it a bread-like quality when baked. It then occurred to me that I could leverage Bisquick for both its leavening as well as its gluten content. Yes, sorry, this recipe is far from gluten-free, so my apologies to readers with celiac disease or are otherwise gluten-sensitive. I was just thinking about myself on this one.

The resulting recipe so far has met my needs perfectly. I use a half-and-half mixture of Bisquick and almond flour and the net carbs work out to 6g per roll/biscuit/muffin—however you’d like to call them. The trans-fat is less than 1g which qualifies for 0g with respect to nutritional labeling requirements for commercial food products. Now, I certainly understand that this sort of thing qualifies as low-carb, Paleo, etc. sacrilege and you’re free to skip this one. But you’ll never know what you’re missing! 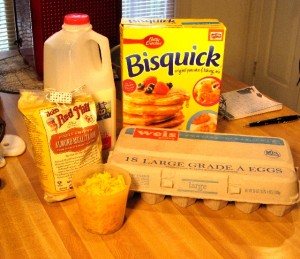 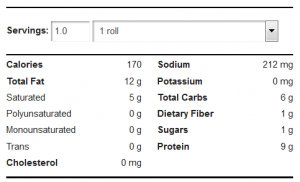 I use these rolls in various ways:

The important thing to note is I don’t make these all the time. They are just a part of my “carb rotation” now that I’m working more carbs back into my diet. And since they involve a bit more work, it’s something that naturally limits consumption.

A note about toasting: I like to toast a roll especially when making a turkey club, but just be aware that due to their thinness and cheese content, that they tend to curl up at the edges. Therefore, set your toaster lower than you normally would for regular bread and don’t freak out if they still curl up a bit. If you’re really careful, you can “smooth” the curls down a bit.