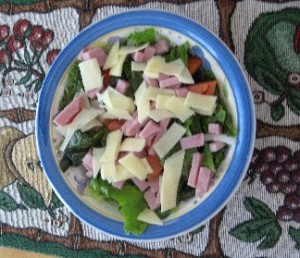 My very first job where I actually punched a time clock, worked my butt off, and collected a real paycheck every two weeks was working as a dishwasher in the kitchen of a country club. I started there in the summer after my 14th birthday (minimum age to get a work permit).

It was bad enough that it was in the middle of summer in the Washington, DC area where the summer months are legendary not only for the heat, but the life-sapping humidity. Probably only Viet Nam can beat out DC for heat and humidity. Add a sweltering hot kitchen with hot grills, large pots of steaming liquids, and being stationed right next to an industrial sized automatic dishwasher and you have a facsimile of Hell itself. It truly was “Hell’s Kitchen” and in more ways than just the unbearable heat!

The only relief to be found for a teenage dishwasher like myself was to be sent down a flight of metal stairs to the stock room to fetch provisions for the various cooks and the head chef. The head chef was a particularly disagreeable chap whose bad side you didn’t want to get on. Fortunately, he seemed to like me or at least not detest like he did a lot of my younger co-workers.

Directly across from the dishwashing station was the salad and sandwich station, which was commanded by the “salad lady” whom we all referred to as “Miss May”. May was a large, matronly woman with a very heavy North Carolina accent. I often struggled to decipher what exactly she was saying, but just about everything she said to me began with “Honey, run down stars and fetch me…”

She would have me up and down those metal stairs many times during the course of my shift fetching her the various ingredients that she would require for the sandwiches, salads, and even the desserts she made. Like the head chef, May didn’t care for most of the boys who worked in the kitchen, but for some reason, she cut me some slack and would even sometimes offer me a large bowl of vanilla ice cream. I’m not exactly sure why, perhaps because most of my coworkers took every opportunity to slack off and though  I wasn’t terribly competent at most things in the kitchen, I did try really hard at it.

One of the specialty dishes the country club was known for was their Chef Salad.

Until coming to work in the country club kitchen I was not familiar with Chef Salads. It’s a simple dish that is essentially a lettuce salad with chunks of ham and cheese sprinkled on top and served with the dressing of your choice. It was an early version of today’s “Big Salad” and was enough to be a meal on its own. For this reason, it was quite popular with the ladies who dropped by the “Mixed Grill” at lunch time.

One day while I was sweating away at the dishwasher, I heard Miss May call me over. She said “Honey, run down stars and fetch me a big jar of oleevees!” I had no clue what “oleevees” were, but I was sure that the stockroom manager would know. I ran down to the stockroom and told the manager that Miss May required a large jar of “oleevees”. He looked at me like I was crazy and said to run back upstairs and find out what she really wanted. I would do this two more times and each time Miss May would get more and more exasperated with me. “I said bring me a large jar of OLEEVEES!”

On the final trip back down to the stockroom, the manager and I had the same revelation at exactly the same time. “Oh! She wants a large jar of olives!”

And that’s my background story about the Chef Salad – thanks for hanging around to the end. I never ate a Chef Salad until very recently when looking around for low carb lunch ideas. I consume a lot of salads, but they can get a bit boring after a while. That’s when I decided to start adding meat and cheese to my salads and recalled my days back at the country club kitchen. It just goes to show that you never know when a particular experience or bit of acquired knowledge may come in handy someday way in the future!