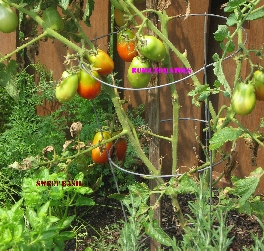 Having been raised in half an Italian-American household, I’ve had my share of tomato sauce over the years. It probably makes up a significant portion of my bloodstream at this point. As I’ve turned away from eating starchy carbs which includes all the good stuff that Italians hold so dear such as pasta, pizza, and lots of bread with butter, I’ve had to find alternative uses for marinara sauce.

But don’t worry, I’ve found that you can have your marinara sauce and enjoy it too without the heavy starch load that typically accompanies it. For now, I’d like to share an old family recipe for homemade marinara sauce. In future posts I’ll share some unique ways of using it in some new twists on traditional recipes.

Being that it’s the height of backyard tomato growing season where we live, it’s a perfect time to show you step-by-step how to make marinara sauce completely from scratch. It involves a bit of extra work, but it’s well worth it in terms of freshness, flavor, and texture. I’m also including two variations on the recipe so that you can make quicker versions in just a few minutes. No matter which version you choose to go with, it will be light years better than anything you can get in a jar from your grocer’s shelf. Those jar sauces that look so inviting in the store are pretty horrid tasting – at least to my palate.

The best varieties of tomatoes to use as the basis of marinara sauce are the Italian style plum tomatoes such as San Marzano and Roma. We will occasionally toss in the odd salad style tomato if we have extras just to add some bulk to the pot. We also grow our own basil and oregano which are essential ingredients to any marinara sauce and really make the flavor of the tomatoes come alive. Instead of pureeing the tomatoes with a food mill or food processor, I employ a trick learned years ago from my aunt who taught me a lot about what I know about Italian cooking. The “trick” involves using a potato masher to break up the pulp of the tomatoes and release the juicy goodness inside!

This recipe makes enough for several meals or dishes and tomato sauce freezes very well. Those plastic carryout containers that soups come in from Chinese restaurants are perfect for storing and freezing extra sauce. 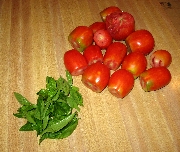