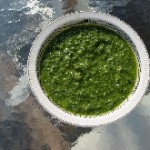 Pesto was once a pretty big deal, going back a decade or two. Nora Ephron referred to it as “the quiche of the 80s” in her screenplay for “When Harry Met Sally.” Its popularity reached its pinnacle sometime during the 90s and was the go to ingredient for the folks we now refer to as [Read more…]